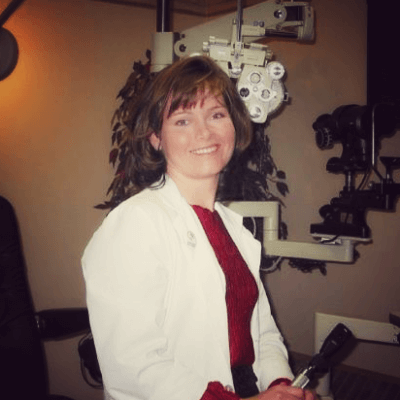 Dr. Kimberlee Robertson-Woods is an Optometrist established two active primary eye care practices in the Niagara peninsula. She has shared space with Ophthalmologist Dr. George Beiko at the Niagara Health Centre, in St. Catharines. In earning her various degrees, Dr. Robertson-Woods attended university for over ten years. She initially enrolled in a general Arts and Science program at the University of Toronto. Prior to attending the University of Waterloo's School of Optometry, she obtained her undergraduate science degree from the University of Guelph through the college of Physical and Engineering Sciences. She received her Doctor of Optometry Degree from the University of Waterloo and has received certification for the treatment and management of ocular disease. In addition, Dr. Robertson-Woods has received numerous academic awards and has been on the Dean's Honor List every semester for both her Bachelor of Science and Doctor of Optometry Degrees. While in Waterloo, she was a teaching assistant for both the School of Optometry and the Department of Biology, teaching students and conducting labs for physical optics, embryology and histology. During her studies, Dr. Robertson-Woods completed two externships in ocular disease and therapeutics at Omega Tertiary Eye-Care Centres in Alabama. While there she participated in advanced aspects of therapeutic eye care, including Cataract, Glaucoma, Retinal and Extra-ocular muscle surgeries and management. She also studied at a surgery centre specializing in only vitreo-retinal surgical procedures, and has experience in ultrasonic imaging (A and B scans), intravenous fluorescein angiography and retinal tomography. She continually strives to learn and is currently working towards her Fellowship in Neuro-Sensory training, Developmental and Behavioral Optometry. Dr. Robertson-Woods has also acted as a consulting Optometrist at LASIK Centres of America, and has been an Associate with Dr. James Agate in Grimsby. Dr. Robertson-Woods is an active member of the Canadian Association of Optometrists, The Ontario Association of Optometrists, the College of Optometrists of Ontario, the Niagara Society of Optometrists, the Ocular Nutrition Society and the College of Optometrists in Vision Development. She has acted as a proctor for the Canadian Standard Assessment in Optometry through the Canadian Examiners in Optometry, for Optometrists to become licensed to practice in Canada. Dr. Robertson-Woods primary areas of interest are pathological states of the eye and ocular adnexa; pediatric optometry, developmental and behavioral optometry, visual rehabilitation, nutrition and sports training; and the ocular health concerns of the aging. Upon graduation, she was presented with the William Feinbloom Low Vision Award "in recognition of the graduating student who, by study, interest and performance, has demonstrated aptitude in the clinical care of Low Vision patients". She enjoys educating the public through her clinics as well as through community based public speaking forums. Her office and her services were utilized as a rotation site to teach fourth year University of Waterloo Interns different aspects of primary eye care practice. She is involved in providing eye care for the Third World and has conducted and managed two eye care clinics in impoverished areas of Central America.

We are now open for routine eye care by appointment only. To view our COVID-19 protocols and procedures please click here.